Breast augmentation with implant in Switzerland

The breast implant fitting is certainly the most popular and the best known cosmetic surgical procedure in the world and in Switzerland. The patient’s motivation and expectations are very important to consider in this type of surgery. Thanks to the Crisalix® software, a preview of the result is possible even before the procedure. An ideal solution to refine one’s project.

> all about BREAST IMPLANT <

DEFINITION AND OBJECTIVE OF SURGERY FOR A BREAST AUGMENTATION WITH IMPLANTS IN LAUSANNE AND GENEVA, SWITZERLAND

Mammary hypotrophy affects femininity and can have significant physical and psychological repercussions. It is sometimes the cause of a serious complex responsible for a loss of self-confidence. The aim of the intervention is to achieve a breast augmentation, thanks to the implantation of breast implants. The result must be as natural and harmonious as possible.

The breast implants that are used in Geneva, Montreux or Lausanne (Switzerland) and around the world are mainly filled with medical gel silicone.

These breast implants have been used since the 1960s to increase the volume of the breast. Over the decades, scientific studies have demonstrated their safety and their appearance very similar to a normal breast palpation. Since the beginning of the 2000s the breast implants have been modified to be even more resistant and to have a longer life. As with all medical devices, their manufacture is subject to very strict rules.

The breast implants consist mostly of a very resistant textured envelope, elastic and composed of three layers. The envelope is filled with a medical silicone gel whose flexibility and consistency are close to those of a real breast. The technical modifications made to the new implant relate to:

In addition to these technical modifications that make breast implants much more reliable, there are now several forms of round or anatomical breast implants (drop-shaped). These implants are differentiated by their diameter at the base, their projection or profile (low, moderate and high) and their height (for anatomical implants).

The wide variety of implant shapes and volumes allows each patient to make a personalized surgical decision, depending on their body features.

BEFORE THE SURGICAL PROCEDURE

The medical consultation will take place at Laclinic-Montreux, or at the Beauty Suite in Lausanne, (only 30 minutes from Geneva by train).

For Dr. Jean-Charles BAYOL, each patient is unique. The consultation will begin with a thorough questioning in order to know your background, your wishes and your motivations. Clinical examination will inspect and examine the breast, it will end with the measurement of the breast and the chest.

After the questioning and the physical examination, Dr. BAYOL will determine with you, the shape and volume of the desired implants, the seat of the future scars, the location of the implants compared to the pectoral muscle in order to obtain the best aesthetic results that will fulfill your expectations.

A three-dimensional computer simulation of the expected result can immediately be achieved through a touch pad (iPad) equipped with a scanner, or after the digitization of photographs taken after the clinical examination. The Crisalix software makes it possible to simulate the breast augmentation with various types of implants and compare the results.

Beyond the age of 35, or if there is a family history of breast cancer, a mammography and / or an ultrasound will be prescribed.

Four medical prescriptions will be made regarding the surgical procedure: one for a preoperative assessment, one for a compression bra, one for stockings, and a last one for a homeopathic treatment that will have to be taken 10 days prior to surgery in order to minimize, Edema and postoperative hematomas.

An appointment for a consultation with an anesthetist should be made.

Since tobacco has a deleterious effect on the healing process, it is strongly recommended to stop smoking at least one month before the procedure.

Taking aspirin (which promotes bleeding) should be prohibited in the 15 days before surgery.

It will be necessary to be fasting (not to eat, to drink and smoke) at least 6 hours before surgery.

TYPE OF ANESTHESIA AND HOSPITALIZATION MODALITIES FOR A MAMMARY IMPLANT SURGERY

This procedure will be performed under anesthesia in the operating room, during which you will be deeply asleep.

It is required to stay for a day and night at Laclinic in Montreux. Most often the patient checks in the morning, is operated and is monitored the rest of the day and the night that follows. Then the check-out takes place on the following morning.

Each aesthetic surgeon has his own technique that he adapts to each patient in order to achieve the best result. However, it is useful to explain some common surgical principles:

There are several possible skin incisions (Figure 1). The design of these pathways corresponds to the seat of the future scars, which will be hidden in junction zones or natural folds. Each approach has its advantages and disadvantages.

Figure 1: The different techniques of approach for a breast implant surgery 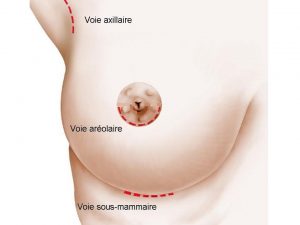 -In front of the muscle or pre-muscular (figure 2): the implant is positioned behind the mammary gland and in front of the pectoralis major muscle. This is the best anatomical position but the upper pole of the implant may sometimes be visible, especially in the case of a thin patient. 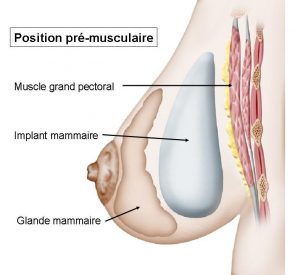 The decision of the implants positioning depends on the morphological characteristics of the patient with whom Dr. BAYOL will determine the best solution.

If the breast falls too much before the procedure (breast ptosis), it will be necessary to associate the installation of the breast implants with a breast lift or mastopexy (lien vers “breast lift”). This lifting consists in diminishing the excess of skin to bring up the breast and the areola. The scars are more important: a scar around the areola, a vertical scar under the areola, +/- a scar in the sub-mammary fold.

A drain is put in place to evacuate the blood. It can be kept for 1 to 5 days and does not prevent from returning home.

At the end of the procedure, a simple dressing is placed on the scars. It is associated with a compression bandage. The restraint bra, prescribed during the preoperative consultation, is set up immediately after surgery in the operating room.

Depending on the cosmetic surgeon, the technique of appproach and the possible need for complementary gestures, the procedure can last from one hour to two and a half hours.

There is sometimes pain when the breast implant is placed behind the muscle and / or when the prosthesis is too voluminous. These pains can last a week; they will be efficiently calmed by a prescription of an analgesic treatment.

The first few days the breasts are bruised, swollen (edema) and it is sometimes difficult to lift the arms.

In order to limit the importance and the duration of the surgerical follow-ups, you will be systematically taken care of by the physiotherapy department for postoperative care. From the next morning, gentle massage of the operated area and LED care will ensure lymphatic drainage and will promote the healing process.

The first dressing will be removed the day after the surgery. Simple local scar treatments must be performed daily for a period of 10 to 15 days. Wearing a bra without armature night and day is mandatory for about 2 months.

A convalescence of one week is necessary, the practice of sport can be resumed after 6 weeks.

THE RESULT OF SURGERY FOR A BREAST AUGMENTATION WITH IMPLANTS IN MONTREUX, LAUSANNE AND GENEVA (SWITZERLAND)

It will take 6 months to get an idea of the final result. During this period, the breast implants will take their definitive position and the breasts will progressively soften.

The scarring result takes much longer, since it will take sometimes from one year to a year and a half to get a definite result.

The increase in the volume of the breast modifies the patient’s silhouette, this morphological modification improves the psychological well-being of the patient and often gives her more confidence.

Apart from weight loss or weight gain, the volume of the breast will not move in time and the result will remain stable. However, over time, the breasts will fall gradually. This will of course depend on the age of the patient, the elasticity of her skin, but also on the size of the implants.

These imperfections can sometimes be corrected a few months after the installation of the implants, particularly by a lipostructuring of the breast (reserves of fat will be necessary).

Outside the areolar pathway, where the galactophoric ducts are severed, breast-feeding is still possible after a breast augmentation surgery. Pregnancy is also possible without problems for the patient or the baby. If the patient wishes to be pregnant, it is preferable to observe a delay of 6 months after surgery.

Numerous studies have shown that compared to the population of women without breast implants there is no additional risk of an autoimmune disease appearance after a breast implant surgery.

A breast augmentation surgery with implants does not increase the risk of developing breast cancer.

However, breast implants can interfere with the performance and interpretation of mammograms and / or ultrasounds used for breast cancer screening. It is therefore necessary to warn the radiologist and always have your carrier of implants card.

If necessary, other techniques such as MRI can be performed.

As with any implantable medical device (such as heart valves, hip prosthetics, etc.), breast implants can wear out and their installation is not guaranteed for life.

The recent breast implants have a much stronger envelope and more solid gel. Although they are not guaranteed for life, they do not need to be changed every ten years as it was the case before. Breast implants will only be changed if there is a problem or if the patient wants a larger volume, another shape…

In general, the first postoperative consultation takes place one week to ten days after surgery. The patient is examined again one month later, then 3 months, 6 months and after one year. These postoperative appointments are paramount even if everything goes well.

Beyond the first year it is necessary to consult every 2 or 3 years. One should not hesitate to consult in case of the slightest problem or the slightest doubt about an anomaly. For it is better to see his aesthetic surgeon for nothing (and be reassured) than to let a problem evolve.

POTENTIAL COMPLICATIONS REGARDING A BREAST AUGMENTATION

Although breast augmentation with implant is considered as an act of cosmetic surgery, it is primarily a surgical procedure, which may involve risks even if they are low:

The risks associated with anesthesia will be discussed with the anesthesiologist during the preoperative appointment.

However, any surgical procedure, even cosmetic surgery must be carried out in a strictly surgical environment in the operating room. As a result of the evolution of anesthesia and resuscitation techniques in recent decades, complications related to anesthesia are now exceptional.

The use of a qualified, competent, and serious cosmetic surgeon reduces these risks, but does not completely eliminate them.

The aim of this surgical procedure is to improve the volume and shape of the breast. If your expectation is justified and reasonable, you will be fully satisfied with the outcome of the procedure.