Blepharoplasty consist in the effects of time on the eye. This surgery allows operate on the upper and / or lower eyelids. Even if the procedure can be done as an outpatient, it is sometimes necessary to associate it with a more comprehensive facial rejuvenation surgery such as a face lift In this case, hospitalization may be required.

> all about EYELID COSMETIC SURGERY (BLEPHAROPLASTY) <

The cosmetic eyelid surgery is called blepharoplasty. Blepharoplasty may be performed on the upper eyelids and on the lower eyelids.

This procedure can be done alone or as part of a facial rejuvenation surgical procedure such as a facelift.

– regarding the upper eyelids: an aging of the forehead and a fall of the eyebrows;

– regarding the lower eyelids: an aging and ptosis of the middle third of the face with the hollowing of the dark circles, cheeks and accentuation of the nasolabial fold.

Most often, you need to correct:

– On the upper eyelids: an excess of skin covering the free edge of the eyelid, giving a sagging appearance. More rarely there is an excess of fat resulting in a puffy appearance;

– On the lower eyelids: an excess of skin more moderate than on the upper eyelid, but responsible for a faded and wrinkled aspect. There is frequently an excess of fat increased by ptosis and aging of the cheek, responsible of the appearance of bags under the eyes (Figure 1). 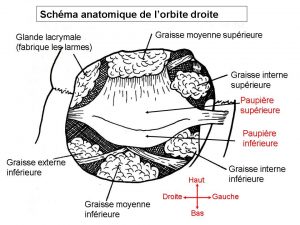 Since blepharoplasty only corrects the aging of the eyelids, it can be associated with other treatments:

– As for The upper eyelids, a specific treatment of the fall of the forehead and eyebrows either surgical (brow lift and / or temporal facelift) or medical (botulinum toxin injections and / or anti-age tensor thread technique).

– As for The lower eyelids: a treatment of ptosis of the cheek, nasolabial and jowls folds or by surgical procedures (head and neck lift, facelift, lipostructuring or lipofilling) and finally through a medical treatment (hyaluronic acid injections and / or Anti-aging tensor threads).

A cosmetic blepharoplasty can be performed from the age of 40 regardless of sex, but can sometimes be performed on a younger patient in case of the early appearance of eye bags.

Two consultations will be conducted by Dr. Jean-Charles BAYOL to prepare for the surgery, which will be customized to get the best result. Consultations take place in Montreux at Laclinic-Montreux, or at the Beauty Suite in Lausanne, (only 30 minutes from Geneva by train).

A consultation with an ophthalmologist is sometimes required to detect an eye problem that can prevent the procedure from taking place.

Medication containing aspirin should not be taken 10 days before surgery.

You should refrain from smoking (or significantly reduce your consumption) one month before and one month after surgery (since it can delay the healing process).

ANESTHETESIA AND HOSPITALIZATION FOR A COSMETIC EYELID SURGERY

If blepharoplasty is performed alone, the anesthesia may be local and there is no need to be fasting.

If blepharoplasty is performed in conjunction with another facial rejuvenation procedure (lifting for instanced), the anesthesia may be:

– General: The patient is deeply asleep.

Blepharoplasty can be performed as an outpatient procedure at Laclinic in Montreux, with a check-out on the same day. In the case of a longer surgical procedure (associated with a facelift), an overnight hospitalization will be required.

The different steps of a blepharoplasty are as follows:

-Incisions in the eyelids (Figure 2):

Figure 2: different incisions of a blepharoplasty 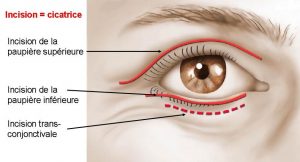 – Upper eyelids: the incisions are hidden in the fold of the upper eyelid or a little above.

– Lower eyelids: the incisions are located a few millimeters under the eyelashes.

In the upper eyelids and in the lower eyelids the incisions may extend outwards but remain very discreet.

The pattern of the incisions corresponds to the seat of the future scars which will be hidden in the folds.

Cutaneous and / or fat resections (Figure 1 and Figure 3): 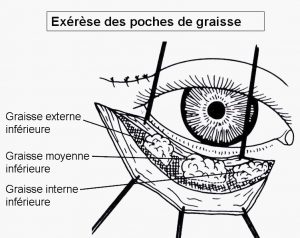 – Upper eyelids: the fat removal is moderate and cautious, especially at the level of the internal fat sack. Skin resection is more important.

-Lower eyelids: Greater fat resection is associated with a spreading of the remaining fat in the case of a marked dark circles. Skin resection is moderate to avoid the risk of scar retraction on the lower eyelid.

-Sutures: They are made with fine surgical threads which will have to be removed between 5 and 7 days.

Depending on the gestures to be carried out, the duration of the intervention varies from one hour to two and a half hours.

Ice packs are placed on the eyelids during the first two days to limit swelling (edema) and bruises. In this respect, homeopathic treatment prescribed as a preoperative treatment may also be continued after surgery to reduce the effects. It will be necessary to wear sunglasses to hide these signs and to protect the eyes.

For several days after the procedure, the total occlusion of the eyelids may be difficult, the external angle of the eyelids can be detached from the eyeball, and tearing is possible.

Post-operative treatment includes:
– A medical treatment: analgesics (although the pain is usually moderate), corticosteroids for 3 days and ophthalmic eye drops and ointments for 10 days.
– Exercises of self-re-education and massage of the scars at the level of the lower eyelids.

The threads are removed between the 5th and 7th day.

Make-up is possible 15 days after surgery. You will be socially and professionally presentable between 15 and 20 days after the procedure.

Most often the scars become quickly discreet, sometimes they can be pink for several weeks.

RESULT OF COSMETIC EYELID SURGERY (OR BLEPHAROPLASTY) IN MONTREUX, LAUSANNE AND GENEVA (SWITZERLAND)

It takes 3 to 6 months to have the final result, it is the necessary period of time for the edema to regress completely. This cosmetic eyelid surgery will have corrected the tired look aspect of the patient’s eyes.

Resection of the fat sacks is definitive and will not reappear. The skin of the eyelids will continue to age and, after several years, will resume its wrinkled appearance. Thus, a new resection of the skin can be considered after 10 years.

IMPERFECTIONS OF THE BLEPHAROPLASTY

One must insist on the face that cosmetic blepharoplasty will not correct:

These imperfections may result from a persistent excess skin in the upper and / or lower eyelids, or excess fat in the lower eyelids. These inadequate resections can easily be corrected under local anesthesia from 6 months after surgery.

However, an excessive resection of skin:

– On the upper eyelids, can cause an incapacity to close both eyelids;

Too much fat resection of both eyelids can cause unsightly hollow eyes.

In fact, one must always be careful. As with any cosmetic surgery, Dr. Jean-Charles BAYOL never overcorrects the defects because their compensation is difficult. However, a small persistent excess of skin or fat will be easily retouched.

COMPLICATIONS OF A BLEPHAROPLASTY

The complications related to anesthesia remain exceptional. The anesthesiologist will inform the patient of the risks associated with anesthesia during the preoperative consultation if the procedure is not performed under local anesthesia.

Although the cosmetic eyelid surgery is simple, it nevertheless remains a real surgical act that must be carried out in a clinical environment such as Laclinic in Montreux.

Surgical complications are rare. The choice of a qualified, competent, and serious cosmetic surgeon trained in this type of intervention, helps to reduce the risks without completely eliminating them.

The possible complications are the following:

The cosmetic eyelid surgery can be done under local anesthesia as an ambulatory surgery, it gives a great satisfaction and a psychological well-being to the patient.

Blepharoplasty is often associated with other surgical procedures and / or medical treatments.