The very thin skin of the inner arm is subject to loosening. Cosmetic surgery offers the possibility to remove the excess skin, reduce the fat infiltration and lift the whole region with a stylish and harmonious final aspect.

> all about ARM LIFT (BRACHIOPLASTY) <

COSMETIC SURGERY OF THE ARM: LIFTING OF THE UNDERSIDE OF THE ARM OR BRACHIOPLASTY IN MONTREUX, GENEVA AND LAUSANNE (SWITZERLAND)

If there is a sagging skin at the underside of the arm, liposuction performed alone will not correct this defect. Only a tightening of the skin will give an optimal result. This cosmetic surgical procedure is called a brachioplasty or underarm lifting.

The aim of this procedure is to remove the skin excess, reduce the fat excess localized on the underside of the arm, and tighten the skin.

BEFORE AN UNDERARM LIFTING

During the preoperative consultation at Laclinic-Montreux, or at the Beauty Suite in Lausanne, (30 minutes from Geneva by car), after an interview and a thorough clinical examination, Dr. Jean-Charles BAYOL will inform you of the ways and means of the procedure, the seat of the scars and the potential need of an associated liposuction.

To reduce the risk of hematoma, one should not take aspirin the week before surgery.

To facilitate the healing process, it is recommended to stop smoking one month before and one month after the procedure.

ANESTHESIA AND HOSPITALIZATION REGARDING BRACHIOPLASTY

A brachioplasty can be done as an outpatient surgery at Laclinic in Montreux, the check-out being done the same day of the surgery in the evening after a postoperative monitoring period.

Each cosmetic surgeon has a technique of his own and adapts it to each patient in order to obtain the best result. Several techniques have been described.

The fat excess is corrected by a liposuction. The skin excess is removed. It leaves a scar which location and length depend on the size of the cutaneous sagging and the type of procedure that has been chosen.

The scar can be vertical, longitudinal, along the underarm or horizontal, following the armpit fold. Sometimes, both types of incisions are combined.

When there is an excess and a significant relaxation of the skin, the correction cannot be done with a discreet scar in the armpit fold. In this case, the discomfort will not only be cosmetic, it will also be psychological and functional (friction and maceration) (Figure 1).

Figure 1: Brachioplasty with a longitudinal Incision, along the underarm 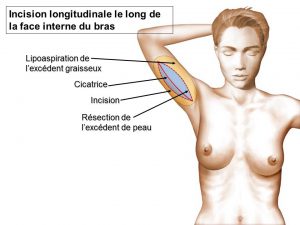 Whatever the technique used, doctor Jean-Charles BAYOL always begins the procedure with a liposuction of the underarm.

The skin excess skin is then removed using a longitudinal incision located on the inside of the arm.

This technique allows the best cosmetic correction of the arm silhouette at the price of a scar that remains discreet due to its location on the underarm. It can sometimes remain visible, hence the importance of preoperative surgical indications and a perfectly informed and consenting patient.

Because of the importance of the scar, the cosmetic surgeon will try to propose, if possible, a procedure that is less ambitious but with a more acceptable result.

The duration of the surgical procedure is one to two hours depending on the importance of the correction to be made.

If the cutaneous excess is less important, a vertical incision is made at the level of the armpit fold after a preliminary liposuction of the arm, then the skin is redraped along the longitudinal axis of the arm leaving a scar hidden in the armpit (Figure 2).

Figure 2: Brachioplasty with a vertical incision in the armpit fold

This scar is usually invisible but the morphological result is less spectacular than the one obtained with a brachioplasty with a longitudinal scar along the underarm.

The duration of the procedure is shorter, approximately an hour.

As for the longitudinal scar, a light dressing is performed at the end of the procedure.

This procedure is certainly less ambitious than the previous one, but one of the main interests of this technique lies in the fact that its simplicity and its lightness allow it to be repeated once or twice in the years following the previous surgery.

It is a synthesis of both previous techniques: it associates a scar in the armpit and a short vertical scar on the upper part of the underarm.

This is a compromise between the advantages and disadvantages of both techniques.

POSTOPERATIVE FOLLOW-UPS AFTER AN UNDERARM LIFTING

As with any plastic surgery procedure, edema and blues appear within hours and days. They will usually disappear within 15-20 days.

To reduce the importance of edema and bruises, you will be systematically taken care of by the department of physiotherapy, for a postoperative care. The check-out will happen on the same day, in the case of an outpatient hospitalization, or the next day, if you stay in hospital overnight. Gentle massages of the operated areas and LED care will ensure the lymphatic drainage and will promote the healing process. Several weeks after the procedure, an LPG treatment can be undertaken on the areas where the fat tissue has been collected.

The pain is often moderate; it is more a sensation of cutaneous tension that will be effectively calmed with analgesics.

During the healing process, it is necessary to avoid any brusque stretching motion that may cause localized additional cicatricial.

Sport activities can be resumed between 4 and 6 weeks after the procedure.

As with any cosmetic surgery, the cicatricial evolution will take one to two years. During this period, the scars will absolutely have to be protected from the sun and UV beams, by using sun blocks. During the first 6 months, it will not be surprising to observe pink scars or even a little swollen.

RESULT OF THE UNDERARM LIFTING OR BRACHIOPLASTY IN MONTREUX, LAUSANNE AND GENEVA (SWITZERLAND)

It takes 6 to 12 months to judge the final result of the procedure. It will result in an enhancement of the arm silhouette that will be thinner with a redraped skin. The benefit will also be functional since there will be less friction and less maceration of the arm folds.

As for any cosmetic surgical procedure, the scar will evolve over one or even two years. Over time the scars will whiten and will remain relatively discreet since they are hidden on the underarms. It is important to note that due to the improvement of the surgical techniques, the expected result of this procedure has been significantly improved.

The lifting of the underarm remains however a delicate procedure for which even the greatest technical rigor does not in any way protect from imperfections or complications.

IMPERFECTIONS OF THE UNDERARM LIFTING

Localized imperfections are possible; they can be seen at the level of:

A large cutaneous resection will lead to an excessive tension in the scars. These tensions will be the origin of enlarged or even hypertrophic scars. Hence the rule of Doctor Jean-Charles BAYOL never to excessively remove the sagging skin because a persistent excess can always be easily corrected in a second time. Similarly, a scar improperly located or asymmetrical with respect to the other arm, can be secondarily corrected under local anesthesia.

It should be reminded that if the scars fade over time, they will not disappear completely. If the cosmetic surgeon does the sutures, it is the body of the patient that heals. Therefore, it is the patient’s own healing process which will decide the quality of their scar

Thus the scars will be subjected to the vagaries of any cicatricial process, with the risk of a hypertrophic evolution which may require a specific treatment.

There may be an inadequate correction, some irregularities due to excess liposuction or asymmetry.

In most cases, the results can be retouched after 6 to 12 months under local anesthesia.

COMPLICATIONS OF A BRACHIOPLASTY

Even if it is a cosmetic surgery, brachioplasty remains a true surgical procedure that carries certain risks and complications, as rare as they may be.

The procedure must be carried out in a real surgical structure, complications related to anesthesia are exceptional. They will be discussed with the anesthesiologist during the preoperative consultation regarding anesthesia.

Regarding surgery, the choice of a qualified plastic surgeon makes it possible to limit the risk of complication without being able to completely eliminate them.

Among these complications, some must be explained:

– Thromboembolic events (phlebitis, pulmonary embolism): These complications are exceptional but serious. The treatment is, above all, preventive: compression stockings, early lifting of the arm, anticoagulant treatment in some cases.

– Hematoma: rare in this procedure, it may sometimes require a new procedure to enable its evacuation in order not to compromise the final cosmetic result.

– Infection: The risk of an infection is increased by the proximity of the armpit which is a natural microbial reservoir. The infection can be prevented by a strict hygiene after surgery. If an infection occurs and antibiotic treatment is not sufficient, a surgical correction may be necessary to drain the infection. The resulting scar, if unattractive, may be secondarily fixed under local anesthesia.

– Lymphatic flow: It may be aggravated and may require repeated punctures. Most often it will dry out without any particular sequelae.

– Delay in the cicatricial process: As seen above, delayed healing may occur and may prolong the postoperative follow-ups.

– Skin necrosis: An excess of cutaneous resection can lead to a localized skin necrosis. The treatment of this complication is, above all, preventive and the amount of skin that needs to be removed should not be overestimated.

– Sensitivity troubles: These disorders can be observed around the underarm. In most cases, normal sensitivity reappears after 3 to 6 months.

A good aesthetic and functional result following an underarm lifting will most often require a long scar that will be easily concealed on the inside of the arm. A more discreet scar will not give such a good result but can be easily repeated several times.

Risks and complications should not be overestimated, but it should be remembered that a cosmetic surgical procedure, even simple, always involves uncertainty.

Choosing a good qualified cosmetic surgeon guarantees that the latter will be trained and qualified to avoid complications, or treat them efficiently if necessary.