The breast hypertrophy and the ptosis (sagging breasts) can be real sources of physical and psychological suffering that cosmetic surgery now knows to adjust. The minimum age to resort to breast reduction is typically 17 or 18 years after the end of breast development. It is also better to wait to have completed one’s pregnancy to avoid altering the result.

> all about BREAST REDUCTION <

Mammary hypertrophy is defined by a breast volume that is too large, especially in relation to the patient’s morphology. This excess volume is usually associated with a collapse of the breast (mammary ptosis) and sometimes causes a certain degree of asymmetry.

Mammary hypertrophy almost always involves physical and functional repercussions (pain in the neck, shoulder and back, embarrassment while practicing sport and difficulties to find adapted clothing). There is also a significant psychological impact.

The surgery aims to reduce the breast volume, to correct a possible ptosis and / or asymmetry, in order to obtain two harmonious breasts fitting the patient morphology (two reduced, ascended, symmetrized and remodeled breasts).

The breast surgery aims to reposition the areola and remove the skin and glandular excess.

Before the procedure, the cosmetic surgeon will draw a cutting pattern on each breast with the position of the future areola and the excess skin and gland to be removed (Figure 1).

The first stage of surgery involves ascending the areola and reducing its diameter after making a mammary gland flap (Figure 2).

Figure 2: repositioning and reduction of the aerola diameter 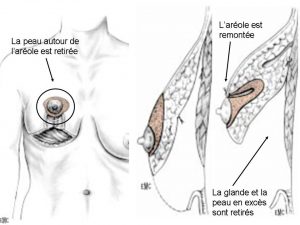 – Cutaneous and glandular excess removal:
After ascending the areola, the cosmetic surgeon removes the glandular excess (Figure 3). It will keep a volume harmoniously fitting the patient’s silhouette, conform to her desires. This residual glandular volume is ascended, concentrated and reshaped according to the preoperative design.

Figure 3: Reduction of the skin and glandular excess

It is then necessary to adapt the skin envelope, which requires removing the excess skin in order to ensure a good hold and a good shape to the new breast. The cut skin edges are then sutured: these sutures are at the origin of the scars (Figure 4). 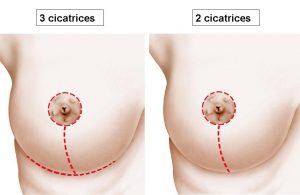 The length of the horizontal scar is proportional to the extent of the hypertrophy and the breast ptosis.

Sometimes, especially when hypertrophy and ptosis are moderate, a so-called “vertical” method can be performed to eliminate the transverse scar in the fold under the breast and to reduce the scarring tissue to its peri-areolar and vertical components.

A breast enlargement for hypertrophy can be performed from the end of growth and beyond, throughout the patient lifetime.

A later pregnancy is of course possible as well as breastfeeding, but it is advisable to wait at least six months after surgery.

The breast surgery does not increase the occurrence of cancer.

BEFORE THE BREAST COSMETIC SURGERY

Doctor Jean-Charles BAYOL welcomes you at Laclinic-Montreux (near Sion), or at the Beauty Suite in Lausanne, (near Geneva and Fribourg).

A preoperative assessment will be performed according to the medical prescriptions.

The anesthesiologist will be seen in consultation no later than 48 hours before surgery.

Besides the usual preoperative examinations, breast radiological assessment will be prescribed (mammography, ultrasound).

Refraining from smoking is highly recommended, at least one month before and one month after surgery, as smoking can delay the healing process.

Medication containing aspirin should not be taken within 10 days before a breast surgery.

TYPE OF ANESTHESIA AND MODALITIES OF HOSPITALIZATION

The procedure is generally performed under general anesthesia, during which you will be deeply asleep.

Hospitalization for one to three days is usually necessary at Laclinic Montreux.

There are many techniques of breast reduction and each cosmetic surgeon performs the technique that he has learned and that he knows best. Dr. Jean-Charles BAYOL, cosmetic surgeon in Montreux, Lausanne and Geneva (Switzerland), is a former intern of the Paris hospitals. He carries out the upper pedicle technique also known as the “Saint-Louis” technique which was taught to him during his various courses in the most important Parisian services. These techniques allow him to achieve the best expected result.

It should be noted that:
– The removed gland is systematically sent to a laboratory for analysis.
– At the end of the procedure a compressive dressing is made.
– The duration of the intervention varies from 2 to 4 hours.

AFTER THE BREAST REDUCTION COSMETIC SURGERY

A surgical breast reduction is not a very painful procedure and the taking of simple painkillers is more often sufficient.

There is a frequent swelling (edema) and bruising of the breast, as well as a difficulty in lifting the arms.

Compression dressing is removed the day after surgery. Lighter dressings will be made by a nurse for about 15 days.

The restraint bra will be put in place the day after the surgery and must be kept night and day for 6 to 8 weeks.

After a breast reduction surgery, the hospitalization usually lasts 3 days.

Non-resorbable sutures will be removed between 10 and 15 days.

A period of convalescence of 15 days will have to be scheduled.

The practice of sports can be resumed after 1 to 2 months.

RESULT OF SURGERY FOR BREAST HYPERTROPHY REDUCTION (OR MAMMOPLASTY) IN MONTREUX, LAUSANNE AND GENEVA (SWITZERLAND)

In the first weeks and the first months the breasts may have a “square” shape, they are bulging over and flat below. It takes 6 months to a year to have the definitive shape: round breasts, a harmonious curve, symmetrical or very close to symmetry, and natural.

The scarring evolution is much longer. In the first months the scars are often red, sometimes hypertrophic, especially the scars placed in the fold under the breast. It takes one to two years for the scars to soften, whiten and become more discreet.

In addition to the aesthetic improvement, the benefit is also functional, the patient having much less back pain and the choice in the matter of clothing is easier. The psychological impact of the procedure is also important.

The goal of a breast reduction surgery is to bring improvement and not to achieve perfection. If your wishes are realistic, the result should give you great satisfaction.

As it has been previously discussed, the imperfections can be at the level of the scars. They may be hypertrophic in the first months after a breast surgery (red and swollen). With time, they gradually fade to become invisible. They can sometimes remain wide, white or brown.

Even if most of these scars fade over time, they never completely disappear. In this regard, it should be remembered that if the surgeon performs the sutures, healing is a random biological phenomenon that depends on each patient.

Sometimes, breast asymmetry may persist, in volume, in height, in height or orientation of the areola.

A secondary surgical correction may be performed, sometimes under local anesthesia, at least one to two years after the first syurgery.

COMPLICATIONS OF THE BREAST REDUCTION COSMETIC SURGERY (OR MAMMOPLASTY)

Even though it is a cosmetic surgical procedure, the breast reduction procedure is a real surgical act. It involves, as with any surgery, certain risks even if they are rare.

During the consultation, the anesthesiologist will inform the patient about the anesthetic risks. It must be known that anesthesia induces reactions in the body that can be sometimes unpredictable, and more or less easy to control. The choice of a perfectly competent anesthesiologist working in a surgical environment implies that the risks involved are statistically negligible. Indeed, the techniques, the anesthetic products and the monitoring methods have made tremendous progress over the last twenty years, offering optimum safety, especially when the surgical procedure is carried out on a healthy patient without any emergency.

By choosing a qualified and competent cosmetic surgeon that has been trained in this type of procedure, you minimize these risks, but do not completely eliminate them.

Fortunately, after a breast surgery for hypertrophy and ptosis, the real complications are rare. In practice, the vast majority of surgeries take place without any problems and the patients are fully satisfied with the result. However, despite their low frequency, you still have to know the possible complications:

A breast reduction cosmetic surgery gives a very appreciable result in terms of aesthetic, functional and psychological comfort, even if the inevitable scars remain the main disadvantage.

Risks should not be overestimated but it should be remembered that a breast surgical procedure, even if apparently simple, always involves a small amount of hazards.

The choice of a qualified cosmetic surgeon gives you the assurance that he has training and the skills to avoid the complications, or treat them if they should occur.