RHINOPLASTY, COSMETIC SURGERY OF THE NOSE

Rhinoplasty is a plastic surgery procedure of the nose. It can be functional and be required an ENT specialist for people with respiratory problems. It can also be done for aesthetic reasons to correct imperfections often leading to large complexes. This procedure can be coupled with a chin surgery (profiloplasty) on patient from the age of 17-18 years, when the growth of the nose is complete.

COSMETIC SURGERY OF THE NOSE (OR RHINOPLASTY) IN MONTREUX, GENEVA AND LAUSANNE (SWITZERLAND)

Rhinoplasty corresponds to the cosmetic surgery of the nose. The procedure consists in the improvement of the nose aesthetic appearance.

Rhinoplasty can be performed alone or in combination with a cosmetic chin surgery also called genioplasty. The combination of these two simultaneous surgical procedures will modify the facial profile of the patient.

The aim of the procedure is to obtain a nose with a natural look in harmony with the rest of the face and not a “rebuilt” and artificial aspect.

Principle of the procedure: the scars are hidden inside the nose, the architecture of the nose consists of cartilage and bone that will be modified to correct the defects. The skin covering this architecture will comply with these changes, hence the fundamental role of the skin quality regarding the final appearance of the nose.

If there is difficulty breathing due to nasal obstruction, surgery of the nasal septum (septoplasty) may be performed simultaneously. In this case, the cosmetic surgeon will perform a rhino-septoplasty.

Preoperative consultation is fundamental before a rhinoplasty. Consultations take place at Laclinic-Montreux, or at the Beauty Suite in Lausanne, (only 30 minutes from Geneva by car).

A thorough interview with the surgeon is essential to know the discomfort and the wishes of the patient. Dr. Jean-Charles BAYOL always begins his examination with a complete analysis of the face. The nose can be studied only in the overall facial context; the nasal septum will also be examined.

Photos taken after the clinical examination will enable to simulate, on a picture of the patient’s profile, the appearance of the nose after the rhinoplasty. This simulation will correspond to the points that have been discussed with the cosmetic surgeon. The final result of the rhinoplasty will not necessarily be superimposable with the preoperative simulation.

As with any surgical procedure, refrain from smoking is strongly recommended before surgery.

ANESTHESIA AND HOSPITALIZATION REGARDING A NOSE COSMETIC SURGERY

Rhinoplasty is usually performed under general anesthesia, sometimes under a conscious anesthesia (neuroleptic sedation) and exceptionally under local anesthesia.

Rhinoplasty can be performed as an outpatient surgery (check-in and check-out the same day of the procedure) at Laclinic in Montreux. For greater security, Dr. Jean-Charles BAYOL advises a one-night hospitalization with a check-out from the hospital the next morning.

Each nose is unique and each face is unique, Dr. Jean-Charles BAYOL adapts his technique to each patient to accurately correct the defect and get the best result. The different stages of the rhinoplasty are:

Figure 1: different incisions of the rhinoplasty 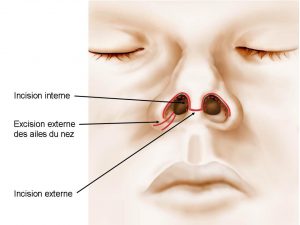 Most often incisions are hidden in the nostrils and will therefore be invisible.

In some cases, scars may be visible in the middle of the columella (external septum separating the nostrils), when the patient wants a modification of the tip of his/her nose or if the patient has already had a rhinoplasty. If the nostrils are too wide, they will be reduced by an incision at the root of the wings of the nose.

The osteo-cartilaginous architecture will be modified to correct the defect:

Figure 2: Ablation of the bump on the back of the nose 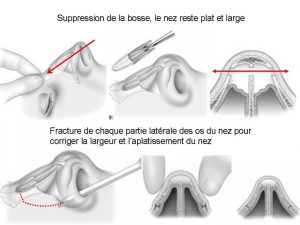 Figure 3: Correction of the nose tip 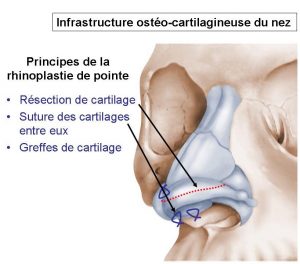 Modern rhinoplasty techniques frequently involve re-inclusions of fragments of cartilage and / or bone that have just been removed.

The incisions are closed with dissolving stitches inside the nose and non-dissolving sutures at the level of the columella or the wings of the nose.

Each nasal cavity is packed with wadding for 24 hours if there is no deviation from the nasal septum. If the septum is deflected, rigid splints will be placed in the nasal cavity and will be kept for 7 to 10 days. The new shape of the nose will be maintained and protected on the surface by Sterile strips and a splint made of plaster or customized thermally formable plastic. This plaster splinter will be kept for 10 days.

Depending on the type of scar and the corrections to be made, the procedure can last from one to two and a half hour.

POSTOPERATIVE FOLLOW-UPS AFTER A RHINOPLASTY

Cosmetic nose surgery generally causes little pain, but the patient will have difficulty to breathe through the nose. In order to prevent nasopharyngeal infection, antibiotic treatment and local care will be prescribed.

There are frequent bruises and swelling around the eyes (edema) that can be impressive for the patient and his entourage. They usually regress between 10 and 20 days.

THE RESULT OF A COSMETIC NOSE SURGERY (OR RHINOPLASTY) IN MONTREUX, LAUSANNE AND GENEVA (SWITZERLAND)

It takes around 3 to 4 months for the edema to regress completely and to get a glimpse of the result. This result will be considered final after a year. It corresponds to the patient’s wish and is mostly similar to the simulations carried out before the procedure.

The benefit for the patient is not only aesthetic but also psychological.

IMPERFECTIONS OF THE RESULT

They may be caused by unexpected healing reactions, poor skin draping (when the skin is thick) or scar fibrosis:

It may also be a deficiency in the surgical correction (small persistent bump) which can easily be corrected under local anesthesia. An excess of correction will be more difficult to correct.

As for any cosmetic surgical procedure in general, one must remember that the modifications must always be reasonable and natural. Since excessive correction is more complex to rectify, the situation can lead to real discontent.

The risk of surgical retouching is therefore not negligible regarding a rhinoplasty. If necessary, this can be done under local or general anesthesia. It should not be done less than one year after the initial procedure. It is indeed necessary to wait for the complete disappearance of the scarring phenomena to operate under good conditions.

THE COMPLICATIONS OF RHINOPLASTY

A rhinoplasty is a cosmetic surgical procedure, but like any surgical act, it carries risks even if they are rare:

They remain exceptional. The anesthesiologist will inform the patient of the risks associated with anesthesia during the preoperative consultation.

Dr. Jean-Charles BAYOL will prescribe antibiotics to avoid any superinfection of the sinuses due to the congestion of the nasal cavities.

Rhinoplasty is a cosmetic surgical procedure that gives great satisfaction to the patient. The experience of the cosmetic surgeon is very important to limit the risk of complications and imperfections of results that may exist.

During his training, Dr. Jean-Charles BAYOL specialized in cosmetic surgery of the nose, frequently performs this procedure at Laclinic in Montreux near Lausanne, where the whole team will listen to you and will take care of you to make this procedure a real success.