This surgery consists of two procedures. The first corrects the appearance of wrinkles on the forehead and between the eyebrows (commonly called “frown lines”). The second part of the surgery fights effectively against the sagging of the temporal region of the face, the crow’s feet wrinkles and the fall of the eyebrows. The frontotemporal facelift is a common surgical act which can be done from the age of 40 and concerns both men and women.

> all about FOREHEAD AND BROW LIFT <

The lifting of the upper third of the face has two interventions:

These procedures do not aim to change the face feature but to reposition its anatomical structures, forehead and eyebrows, in the position they had a few years before. However, the brow lift and the temporal lift allow a radical and definitive correction, unlike the botulinum toxin injection, cosmetic medical treatment that will allow the same corrections, but to a lesser extent and only temporarily (3 to 6 months).

These two face-lifts can be performed separately but in practice they are often associated. They can also be combined with other cosmetic surgical procedures (face lift, mid-face lift, blepharoplasty and lipofilling or lipostructuring) or cosmetic medical treatments (dermabrasion, laser, peeling, injection of hyaluronic acid).

When combined with a cosmetic surgery of the upper eyelid or blepharoplasty, it limits the amount of skin to be removed on the upper eyelid and the length of the scar. It will also correct, at least partially, the excess skin by raising the forehead and the eyebrows.

The frontal facelift as the temporal facelift can be achieved through small incisions under endoscopy.

The fronto-temporal facelift can be done on both women and men from the age of 40.

After these procedures the aging of the face will continue. A cosmetic care with specific treatments of the skin (laser, pulsed lamps, etc.) and injections (Botox, filling products) will help to maintain a longer result. A new procedure, often more moderate, may sometimes be necessary.

Doctor Jean-Charles BAYOL will carefully listen to your request. He will then make an accurate clinical examination of the entire face and especially the frontal and temporal regions. He will explain to you the benefits of a temporal facelift and a frontal facelift compared to a medical treatment with botulinum toxin injections.

A second preoperative consultation (free of charge) will happen at Laclinic-Montreux (near Sion), or at the Beauty Suite in Lausanne, (30 minutes from Geneva). This is an opportunity to renegotiate the terms of the procedure and answer your questions.

As with any cosmetic surgical act, it is strongly advised to stop smoking at least one month before surgery and refrain from smoking one month after since it can delay the healing process.

Taking medicines that contain aspirin should be prohibited within 10 days preceding the procedure in order to limit the risk of bleeding during and after the surgery.

An antiseptic shampoo will be applied the night before and the morning of the surgery.

ANAESTHESIA AND HOSPITALIZATION FOR A FRONTO-TEMPORAL FACELIFT

The frontal facelift and the temporal facelift can be performed in the operating room under general anesthesia or local anesthesia also called deepened sedation (local anesthesia intravenously associated with tranquilizers). The choice of the type of anesthesia will be discussed between the patient, the cosmetic surgeon and the anesthetist.

If done separately, frontal and temporal facelifts can be performed as an outpatient surgery with a check-out on the day of surgery. If associated with other surgical procedures, a 24-hour hospitalization will be required at Laclinic in Montreux.

Your cosmetic surgeon uses his own surgical technique that he will adapt to each case in order to get the best result. The different stages of the procedure are:

The drawing of these incisions corresponds to the position of the future scars. They are almost invisible, short and hidden in hair.

Regarding the temporal facelift: the incision measures between 4 and 6 cm and is located a few centimeters behind the hairline. The scar can also be located on the hairline (precapillary scar) when the hairline is already fairly remote and / or if the amount of skin to remove is important.

As for the frontal and temporal facelift, it is performed endoscopically consisting in 3 to 5 smaller incisions (about 1 centimeter), concealed in the hair and (Figure 1).

Figure 1: Scars of the frontal and temporal endoscopic facelift 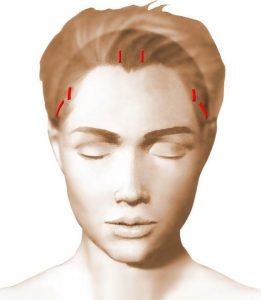 The endoscope connected to a mini camera that helps visualizing the undermining of the tissues will be inserted in one of the scars. The other scars will allow the passage of specific surgical instruments designed for the endoscopic surgery (Figure 2). 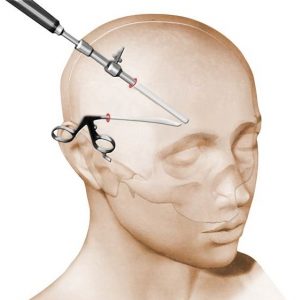 Regarding the temporal facelift, the undermining is carried out on a deep anatomical plane. The importance of this separation depends on the flexibility of the tissues. When there is excess skin around the temporal and the crow’s feet wrinkles region, peeling may also be subcutaneous.

As for the endoscopic frontotemporal facelift, the forehead and temples are peeled to the eyebrows and the bridge of the nose. This wide separation is performed through small incisions and under video control.

This concerns the surgical period of time specific to frontal facelift:

The frontal facelift allows a radical and definitive correction of these lines, unlike the botulinum toxin injections, which permit only a partial and temporary treatment of the forehead wrinkles and frown lines (4 to 6 months).

In the case of an isolated non-endoscopic temporal facelift, the elevating the end of the eyebrow and the retightening of the skin are appreciated, being careful to leave the face its natural expression.

As for the frontotemporal endoscopic facelift, the detached tissue will be retightened to smooth the crow’s feet wrinkles, lift the eyebrows and remove the sagging skin of the forehead. They will be maintained in good position by deep attachments.

They will be most likely closed with staples.

Depending on the surgeon, the importance of improvement and the possible need for additional procedures, the intervention can last from 45 minutes to an hour and half.

POSTOPERATIVE OUTCOMES OF THE FRONTAL AND TEMPORAL FACELIFT

The check-out will happen on the same night or the next morning if the frontotemporal facelift has been associated with other surgical procedures.

These surgical acts are not really painful, however there may be an uncomfortable feeling of tension in the upper third of the face.

Typical facial swelling (edema) and bruises (not to be confused with a hematoma) will appear in the first days after the surgery. They gradually disappear in 15 to 20 days. Please note that in the case of an isolated temporal facelift, a cutaneous ring at the top of the temporal scar may appear, it will fade in a few weeks.

To minimize the importance of the postoperative outcomes you will be systematically supported by the physiotherapy department for postoperative cares. You may proceed to check-out from the hospital on the same day of surgery in case of an outpatient hospitalization, or the next day if you stay in the hospital overnight. Gentle massage of the operated area and LED cares will ensure a lymphatic drainage and will promote the healing process. Several weeks after surgery, a LPG treatment may even be undertaken.

When the scars are hidden in the hair, the staples will be removed between 7 and 10 days. When the scars are located on the hairline, they will stay visible but will fade after the 4th postoperative month when the hair will regrow through.

During the first weeks the forehead may be insensitive, this feeling may be associated with itching of the scalp and skull which will gradually disappear.

Regarding a facelift, one must remember that theoretically:

– On the 7th day after surgery, the patient will look presentable to his family;

– On the 15th day after surgery, the patient will look presentable to his friends;

– 21 to 28 days after surgery, the patient will be presentable to the socio-professional environment.

THE RESULT OF A FRONTAL AND TEMPORAL FACELIFT IN MONTREUX, GENEVA AND LAUSANNE (SWITZERLAND)

It will take 4 to 6 months to assess the final outcome that will only be considered final one year after surgery.

The aesthetic benefit of the intervention is often associated with a psychological well-being.

In general, a lifting of a third of the upper face will have achieved an embellishment and a rejuvenating effect of the upper third part of the face, with a correction of the frontal sagging, a rise of the eyebrows, a retightening of the upper eyelids, a smoothing of the crow’s feet wrinkles, and a visible reduction of the forehead wrinkles and frown lines (without a complete disappearance however).

The cosmetic result is usually permanent despite the fact that the skin aging process is not stopped by the surgical procedure. The care by medical and cosmetic procedures will extend the facelift benefits after several years.

Regular injections of Botulinum toxin every 6 months, will help to keep the result:

– In the temporal region: due to the toxin, the weakening of the orbicular oculi muscle decreases the sagging effect around the extremity of the eyebrow;

– In the frontal region: due to the toxin, the weakening of the eyebrow muscles will decrease the sagging effect of the middle part and the central part of the eyebrow.

IMPERFECTIONS OF THE FRONTOTEMPORAL FACELIFT

In the case of an isolated temporal facelift, a partial relaxation of the eyebrow extremity may sometimes require a secondary retightening under local anesthesia.

In the case of an endoscopic frontotemporal facelift, imperfections may be the result of a misunderstanding over what one can expect from the procedure, hence the importance of a detailed preoperative discussion:

– The Forehead wrinkles and frown lines will be significantly attenuated but not completely erased;

– If The excess skin in the upper eyelid is not fully corrected by the replacing of the forehead tissues, an additional upper blepharoplasty may be performed in a second time under local anesthesia.

These imperfections may also be the result of an unexpected and / or unusual scarring reactions: persistent edema several months after surgery or an asymmetric position of the eyebrows.

Correcting these flaws cannot be performed before 6 months after the first procedure, usually under local anesthesia.

COMPLICATIONS OF A LIFTING OF THE UPPER THIRD OF THE FACE

Even if a facelift of the upper third of the face is an act of cosmetic surgery, it does remain a real surgical procedure which involves risks however small they may be.

Complications related to anesthesia are explained by the anesthesiologist during the preoperative consultation. These complications are exceptional especially as Dr Jean-Charles BAYOL performs all surgeries in the operating room at Laclinic in Montreux near Lausanne.

Regarding the surgical procedure, if you choose a good and competent cosmetic surgeon who is qualified and trained in frontotemporal facelifts, you will greatly limit the risk of complications without avoiding it completely.

The postoperative outcomes are usually simple and the patient is satisfied. However, and even if they are rare, complications are possible and must be explained:

The lifting of the upper third of the face can be simply performed as an outpatient surgery that will provide a great aesthetic satisfaction and a psychological well-being.

The results of a frontotemporal facelift are more permanent than botulinum toxin injections that must be renewed regularly every 3 to 6 months.